He knew, for instance, that whales don’t blow water out of their blow-holes, and that blow-holes are actually more like nostrils than anything else. He also knew that baleen whales (humpback, blue, grey) have two blow-holes, instead of just one, like toothed whales (beluga, sperm), and that a you could identify a whale, even from a distance, just on the shape of the spout.

But the spout wasn’t water, it was mostly air and steam. It’s hot inside a whale. He knew all that.

But all his imagination knew is that the busted fire-hydrant looked, for all intents and purposes, like a whale, sticking its one giant nostril right up against the sidewalk for a long exhale.

He was standing on the opposite side of the street from the actual fire-hydrant, from the car-crash itself, but even from there he could feel the cold mist that the hydrant sent spraying up into the air.

Another thing he knew? The color of the paint on a fire hydrant’s cap corresponds directly its capacity in Gallons Per Minute. Red was below 500 GPM, orange from 500-999, and green and then blue above that. It was kind of hard to tell, from where he was standing, what with the steaming car still propped up on the curb and people moving all around it, trying to staunch the flow of water like men in a trench trying to pinch off a ruptured artery. But he thought it was an orange one.

What he didn’t know much about, or really anything about, was what was going to happen next. He figured that somewhere down the line they’d close off the water main. Probably, that would leave this whole street without water for a few hours, or until they fixed the hydrant. That wasn’t really the troublesome part.

What he really didn’t know anything about was car wrecks. Statistics, sure. For instance, in America, in the year 2016, there were over seven million police-reported traffic accidents. 37,000 people died. That was almost as many Americans as died in the Korean War. He knew that stuff, the numbers and the data, even the traffic laws.

But nobody’d ever told him—nobody’d even bothered to write it down for him to read—the sound that a car makes when it hit another car. The shriek of the tires, followed by the crunch, like every destructive sound he’d ever heard all piled up on each other. The shattering of glass. The warping of metal. The hiss of steam. The clunk of the car on the fire-hydrant that he could still feel in his chest like he’d been hit.

He could still smell the rubber burning in the air. Gasoline and oil and a smell like exhaust, but more intense. And the mist, still wafting over his face.

But really, he could’ve guessed all of that. If he’d had enough time, maybe access to a broken drum kit, he could’ve come close to recreating the sound. His imagination was at least capable of that.

It was what happened to the person inside the second car, the one that ran into the first one and beached it up on the sidewalk that stopped him right in his tracks. It was different than the war documentaries. Different than the biographies, the anthropological reports he’d read and reread with rapture.

He knew that the average human body held between 4.5 and 5.5 liters of blood, and that in an average minute, an average human heart could circulate 5 to 7 liters through that body—or out of it, through a gash in the head. But he didn’t expect it to be so red or so completely shocking to see.

Maybe, he thought, as he stood stupidly and watched the firemen twist the door from its hinges with their mythical Jaws of Life (Hydraulically powered, up to 10,000 psi of pressure), if he’d just gone outside more often, if he’d ever used the pocket knife he’d gotten for his eighth birthday and just once cut his finger with it like everybody else he’d ever met, it wouldn’t have come as such a surprise to him.

He stood perfectly still and watched as a fireman held off traffic with a hand-held stop sign. Siren lights whirled.

Wendell pictured himself, vividly, still standing on that cornily-lit podium, with the big black cameras watching, and his own pale hands on that red buzzer, ready to answer the next, even harder question. An unstoppable, question-answering force. But he was more perplexed now than he’d ever been. And more nauseous.

It had been two years since he answered all thirty of those questions in a row, proving definitively that he was the smartest kid not just in his school, but in the whole competition, in a hundred schools. It proved, to him and to his parents, that all of the encyclopedias he’d read as a nine year old weren’t proof of some social defect, just an abnormality, a singularity, proof.

He had a truly gifted brain. He knew one hundred and thirty digits of pi. He knew all the kings and queens of England, the capitol of every country, the names and discoveries of a dozen German mathematicians, the names of Chinese Pirates, the amount of coal produced in the Ukraine (by year), the five largest cities in Mongolia (by population).

But right now, he didn’t know anything. And he couldn’t look away. He’d heard, somewhere, that people sometimes couldn’t. But he’d assumed it was some sort of exaggeration, a romanticization, where someone says something they don’t exactly mean. But it felt real. Like all thirty three of his vertebrae had been fused together.

“Is that guy…” he started to say, to nobody. He wrenched his head to his left and saw an old man watching with the same solidarity, blinking slowly while sirens in the distance wailed, announcing the arrival of another firetruck. What good was a fire truck? They had the opposite problem of fire, right now. Plus, fire-trucks were actually water-trucks to begin with.

Here’s a terrible thing that Wendell knew: if the statistics he studied were right, something like 151,000 people die every single day. But somehow, in the fourteen years of his life, he’d never seen someone do it. He was intimately familiar with the numbers that hung out around death. But death itself was a strange and untouchable blight, a word he could barely bring himself to say.

“Dead?” He made the shape of the word with his mouth and let his breath make most of the right sounds.

The old man shook his head though. “No, he’s alive. They put that brace on his neck, see? They wouldn’t do that if they weren’t trying to keep him alive.”

An ambulance backed right up to the street, as a wall of burly bodies obscured Wendell’s view. They’d pulled the car back away from the fire hydrant. Water ran down the street, flooding the gutters, creeping into the doorway of the Laundromat beside it. A very shaken young woman was crying and standing beside two police officers, one shaky hand on her forehead. The car must’ve been hers.

Wendell wiped his face with his palm, and wiped his mouth twice. It still tasted like vomit on the inside. He spit onto the sidewalk, and tried to think of facts about whales, or the spectrum of electromagnetic light, as it refracted in the water. He blinked a dozen times in a row, throwing off his minutely average considerably.

But what did any of that matter?

His mind could do all those calculations in a second, conjure up verbatim sentences he’d read ten years ago in antique books about the Spanish-American War, while other kids were playing with toys. But it didn’t do a single thing for him, as he watched a man get lifted into an ambulance and carried away. It couldn’t do a thing to carry that image away from his mind, of the two things at once:

Water, flying up. Blood, running down.

He forced himself to turn away, eyes down. He listened to the roar of water, imagining Niagara, with its 3,000 tons of river tumbling every second, of people going over the edge in barrels. He could hear it all the way home. And in his sleep, the screeching of wheels, and the ringing of the buzzer, as he answered question 29, a question about the Democratic Republic of the Congo. His parents cheered in the front row, and he’d felt so nervous he could barf.

A truly gifted brain, he heard them say. And then he pictured it smacking against a steering wheel so hard that a whale swam all the way from the ocean, and poked its nostrils up through the sidewalk, the same way his parents peeked around the door of his room, to make sure he was alright.

Listen to the Podcast! 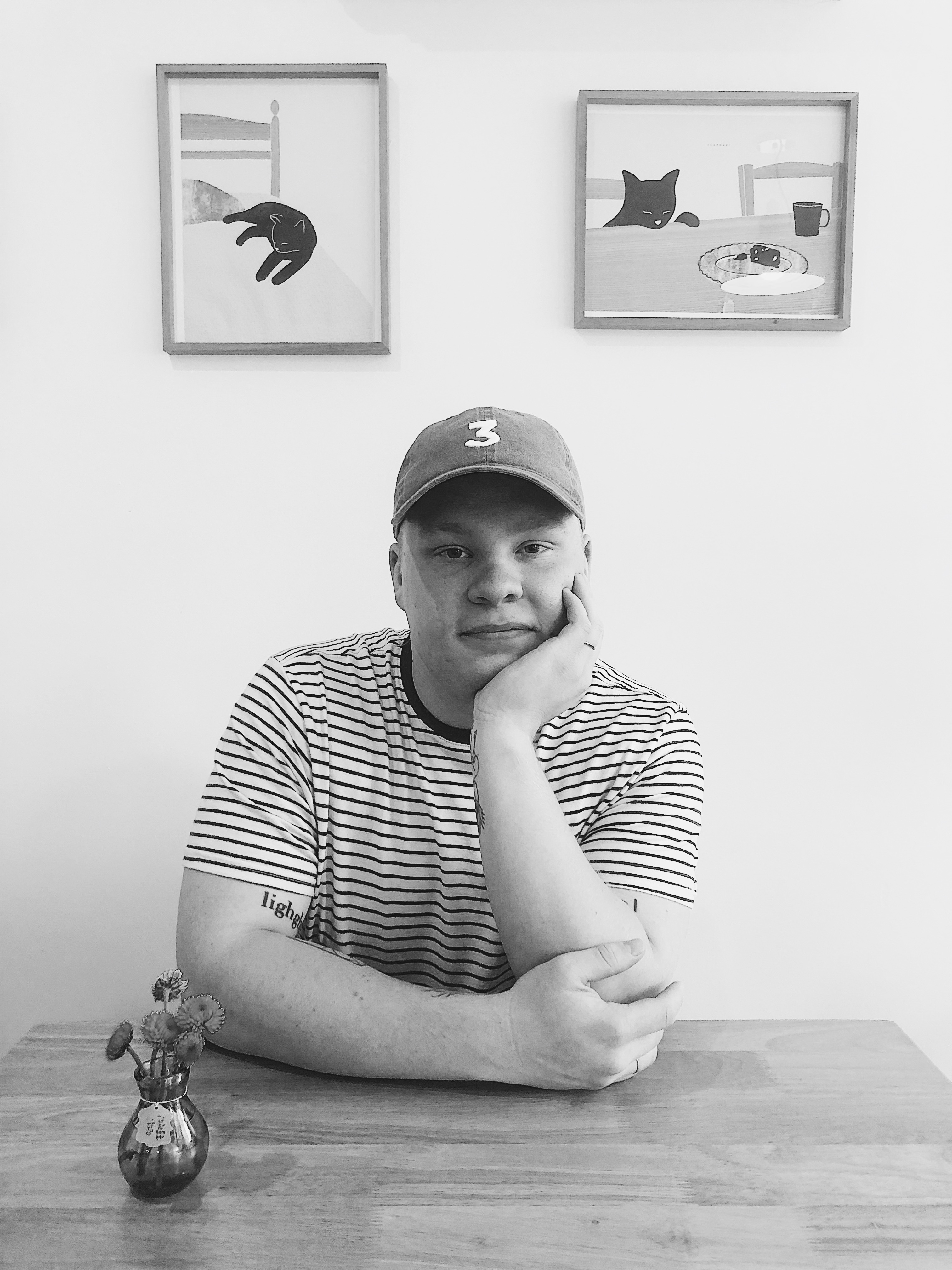 J.D. Miller is the author of The Human Café, The Walking Tree, and Your Eyes On Me. With Aaron Tolopilo, he is the co-creator of 12 Arrows.